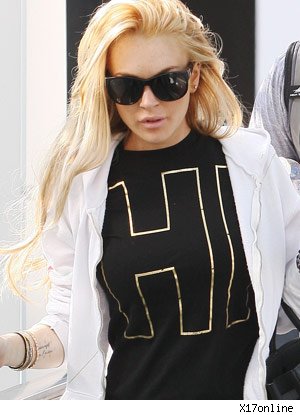 Some people wear their heart on their sleeve, but some celebs wear their thoughts on their shirts! Lindsay Lohan used her black T-shirt to say hello world after she left Equinox gym on Jan. 10. Lohan was recently released from rehab, and it looks like she is using every opportunity, including her clothing, to show the world that she is doing just fine. The blonde bombshell isn’t the only star expressing themselves through their wardrobe. 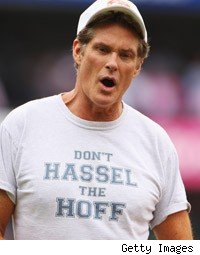 David Hasselhoff poked a little fun at himself when he wore a “Don’t Hassel The Hoff” T-shirt at the beginning of this year in Sydney, Australia. It’s nice to see that The Hoff has a sense of humor, even if it’s at his own expense. 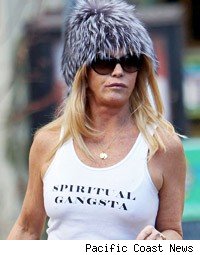 She’s a “Spiritual Gangsta” and a pretty hip grandma. It’s hard to believe Goldie Hawn is about to have another grandchild — daughter Kate Hudson recently announced she is having a baby — or that she is 65 years young. She wore this tank while spending time in Aspen late last year. 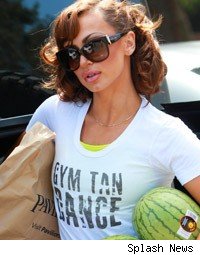 Karina Smirnoff put her own spin on the infamous ‘Jersey Shore’ “Gym Tan Laundry” motto made famous by her ‘Dancing With The Stars’ partner Mike “The Situation” Sorrentino while doing some grocery shopping. 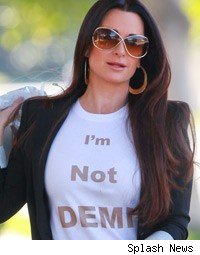 Kyle Richards is setting the record straight once and for all — she is not Demi Moore! The ‘Real Housewives of Beverly Hills’ star does bare a resemblance to the actress, however, she clearly would like the public to know the truth to avoid being swarmed in public.