David Ferrer dumped injury-hit Rafael Nadal out of the Australian Open in straight sets Wednesday, ending the world number one’s bid for a historic sweep of the Grand Slam titles. 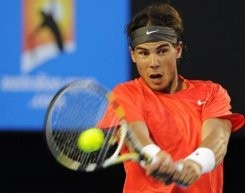 The grimacing Nadal was in trouble right from the 18-minute second game, but despite repeated medical attention and a strapped left thigh he grimly battled to a 6-4, 6-2, 6-3 quarter-final defeat.

Nadal’s shock loss comes on the exact anniversary of last year’s injury pull-out in the quarter-finals against Andy Murray, which also came on Australia Day as celebratory fireworks lit up the Melbourne night sky.

The demise of Nadal, 24, halts his quest for the “Rafa Slam”, a non-calendar year Grand Slam which would have united the four major titles for the first time since Rod Laver in 1969.

“It’s not easy because Rafael is a gentleman and he was playing injured and we are friends,” Ferrer said. “He was injured in the first set but I played my game, I fight a lot and sometimes it’s not easy.”

Nadal stands at nine Grand Slam titles and is the youngest man to win all four of the big tournaments. However, another injury setback will revive doubts about his longevity in the game.

Spain’s Ferrer will face Andy Murray in Friday’s semi-final after the British fifth seed outgunned rising star Alexandr Dolgopolov. Ferrer has a 3-2 winning record against Murray but has never beaten him on hardcourt.

“It was very tough and every point was different, he hits the ball different to a lot of other players and I struggled a little bit with my rhythm early on,” Murray said.

“He came back at me well in the third set but I thought I did well enough.”

Murray, 23, is now into his fifth Grand Slam semi-final as he bids to break a British men’s major drought stretching back to Fred Perry’s 1936 US Open win.

Zvonareva wore a black ribbon on her cap to support victims of Monday’s deadly suicide bombing at Domodedovo airport in Moscow, her home city, which killed 35 and left her frantically calling relatives.

“You’re calling back home and making sure everyone is okay, the people that you know,” she said. “I just tried to put it away. It happened, it is terrible. But you try to move on.”

The 26-year-old remains on course for her third straight Grand Slam final, after losing to Serena Williams at Wimbledon and Clijsters at the US Open in September.

Clijsters overcame a high error-rate to see off Radwanska, who played a limited game but stayed in the match with some scrambling defence, taking advantage of the Belgian’s 37 unforced errors.